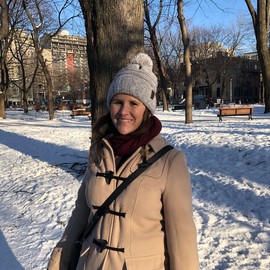 CODES, the University of Tasmania, Australia

I am a geoscientist interested in the links between plate tectonics and ore deposits, and the cyclical and secular changes of these through time. I primarily use isotope geochemistry, statistical programming, GIS and plate reconstructions in my research.

As of 2022, I am a Postdoctoral Researcher at the University of Tasmania in Australia. I am investigating the temporal controls on mineralisation in western Tasmania, on a collaborative project funded by Geoscience Australia. This has important implications for understanding the development of critical minerals in Tasmania, and for constraining the tectonic and metallogenic evolution of this region.

Between 2019 and 2021 I was a postdoctoral fellow at the Geological Survey of Canada and Laurentian University in Ottawa, Canada. I used a global compilation of isotope data (primarily Pb-Pb and Sm-Nd) to unravel the secular changes in mineral deposits and tectonics throughout Earth’s history. This research investigates the relationship between the Pb isotopic evolution of terranes and their metal endowment, with a focus on the Superior Province in Canada. This project is a collaboration between researchers from the University of Saskatchewan, the Geological Survey of Canada and Geoscience Australia.

I completed my PhD at the University of Adelaide (Australia) in 2019. I used isotope geochemistry, structural geology and statistical/computational techniques to construct models for the tectonic evolution of Madagascar and India during the Precambrian. My research involved integrating large datasets of isotopic data to understand the tectonic evolution of Madagascar from the Archean to early Cambrian. This research contributes to broader aims of reconstructing tectonic plates of the entire Earth from the Neoproterozoic to present using GPlates.

I worked as a geochronologist/mineral systems geologist at Geoscience Australia from 2014 to 2015, where I worked on the geochronology and geochemistry of the Tasmanides in Eastern Australia. I completed my honours at Monash University in 2013, where I used geophysics, drillcore data and 3D modelling to interpret the structural evolution of a Cu-Au deposit in South Australia.

New Preprint - Age and geochemistry of the Boucaut Volcanics

The IGCP 648 (Supercontinent Cycles and Global Geodynamics) is a collaborative project involving researchers from all around the world. I’ve been fortunate to be involved in the IGCP 648 group over the past few years and they have supported me to attend conferences and field symposia.
Jul 11, 2020 1 min read